I vividly remember the Greystone Village Grand Opening, way back in September of 2015.  It was an eagerly anticipated event — a “plum” parcel of historic Ottawa was going to change shape. What exactly was this new “village” going to look like?  How was it going to fit between two established and fiercely personified neighbourhoods?  What was its character going to be — and how was it going to create a living, breathing community that would knit together the Glebe and Old Ottawa East while maintaining its own identity?

The answer to all of these questions was by being a “bridge.”

The Oblates lands was an isolated property.  Not only was it isolated from neighbourhood interaction by its intended use as a monastery, but also by its physical distance from the local streetscape and neighbourhood residents, merchants and vendors. It was a beautiful 26-acre section of land with immediate access to the Rideau River, the Canal, proximity to a thriving Main Street and, yes, a 100-year-old historic edifice.

At the Grand Opening, Steve Gordon, President & CEO of Regional Group, and Josh Kardish, then Manager of Land Development at Regional Group, spoke of the process and journey that had brought the project to this point — of building a thriving community.  They spoke of the years of dreaming, head scratching, planning, design, and intense inter-community involvement.

Commonly referred to as “infill projects,” unassigned land parcels that are wedged in areas of development, often struggle to fit and blend.  Rarely do they address the existence of established neighbourhoods, much less welcome them in as an integral element. Greystone Village is the result of beautiful social engineering — a culmination of years of work by Regional Group, Hobin Architecture, Ottawa city planners, Mayor Jim Watson, and a strong community base. The result is a pedestrian-centric mixed-use village that welcomes the greater community of Old Ottawa East into this community. It invites the public to take a walk down the Grand Allee, enjoy the plaza, shops, and provides a literal “bridge” to the Rideau River by offering easy access to its banks. 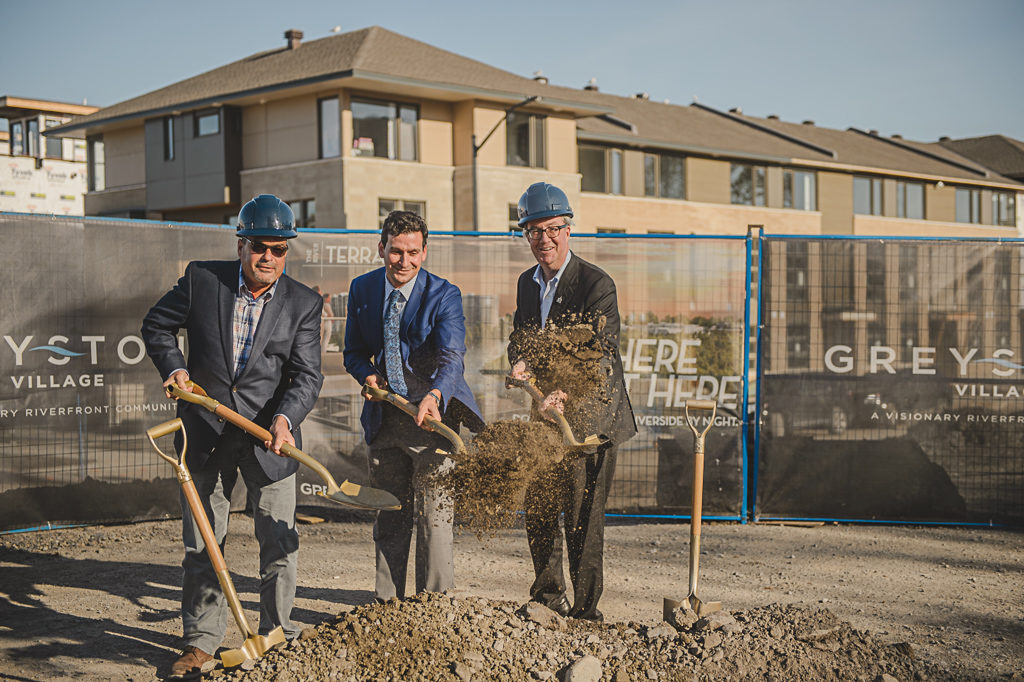 The recent Ground Breaking Ceremony for The River Terraces Condominiums on October 3rd, 2017 represented another enormous milestone in the community vision.  While modern in aesthetic, Greystone Village nods to traditional neighbourhood integration of different building types.  With residents already moving into the townhomes and single family houses, the start of the River Terraces creates another “bridge.”

At the Ceremony, I had the pleasure of speaking with several River Terrace home owners who made the decision to move from adjacent neighbourhoods in the community.  The common theme was that they were moving from their much-loved — yet now too large — family homes to a simpler, easier and more enveloped lifestyle, while remaining within the greater community they loved. Yep, another Bridge.

Copyright © 2021 Greystone Village.
*Prices and specifications are subject to change without notice. All rights reserved. All Renderings are Artist’s Concept. E. & O.E.